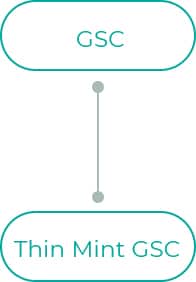 Thin Mint Girl Scout Cookies is an Indica leaning hybrid cross whose genesis is murky and uncertain. With the hype that surrounded the immense popularity of Girl Scout Cookies, several phenotypes emerged. Thin Mint Girl Scout Cookies being one of them. GSC is notorious for her hermaphroditical traits and the Thin Mint Phenotype in all probability is the result of a selfed seed that someone found in a bud of GSC. It has also been claimed that the Cookie Family (who discovered the original GSC) discovered Thin Mint GSC by ”crossing” an undisclosed inhouse strain, known only as “The Secret Sauce”, with Durban Poison and OG Kush. One can choose to believe this tale or not. Cookie Fam are not especially known for breeding and are looked on as average at best by their peers in this regard.

Cookie Family’s claim to fame is to have capitalized on what is no doubt an elite cannabis plant, the original GSC. To say that they skillfully bred her is simply untrue! The common consensus on the origins of GSC is that her creation was most probably an accidental pollination from hermaphrodite plants. For this reason, any talk of breeding when discussing Cookie Fam and the origins of Thin Mint GSC may be taken with a pinch of salt.

Thin Mint GSC buds have a minty aroma, smelling both sweet and spicy with herbal notes. Her smoke is also sweet and spicy, mixing herbal and nutty flavors and a minty aftertaste.

Medically, Thin Mint GSC’s narcotic qualities have been known to help those suffering from depression, anxiety and stress. She has also shown positive signs in helping to relieve the intensity of headaches and migraines.

Thin Mint GSC is considered a moderately difficult strain to cultivate. A medium-height plant, her buds have a dark green complexion and display purple hues. She will typically flower for nine to ten weeks and responds well to heavy-feeding. When grown outdoors in the Northern Hemisphere she is ready for harvest by mid-October and shows strong natural resistance to molds and fungus.

For those interested in acquiring Thin Mint GSC genetics it should be noted that this is a clone-only strain. However, there are many crosses on the market carrying these genetics to varying degrees.

Be the first to review “Thin Mint GSC” Cancel reply