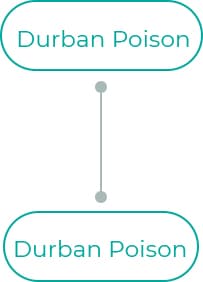 Durban Poison is a pure Sativa landrace strain that originates from South Africa and was first brought back to the United States by the well-known American cannabis activist and enthusiast Ed Rosenthal back in the 70s. This variety was also popularized by the famous botanist and author of “Marijuana Grower’s Guide”, Mel Frank. At the time Mel was working with 2 separate lines referred to as “Line A” and “Line B’.

Line A, favored by Mel for its licorice taste and purple/lavender hues was eventually lost. While Line B was given to Dave Watson (Sam the Skunkman) who was responsible for bringing the strain to Holland. Additionally, there is another version of Durban Poison that was offered by Super Sativa Seed Club (SSSC), which was derived from bagseed that came from a coffeeshop that exclusively sold South African cannabis varieties in Amsterdam, according to Karel, the seed companies founder.

Durban Poison’s aroma is a unique blend of sweet and spicy notes of earth and hash combined with distinct scents of aniseed and licorice. Once blazed, she delivers sweet piney and earthy flavors with herbal undertones and a citrusy aftertaste.

Durban Poison offers a focused and active high that’s mood-boosting and mentally stimulating. This hard-hitting Sativa remains clear and is known to promote an overall uplifting and creativity-inspiring experience with light body effects.

Considered a relatively easy strain to cultivate, this tall Sativa landrace is resistant to most common molds and pests. Durban Poison can be grown successfully indoors, although ultimately preferring the outdoors, thriving in warm and sunny conditions. She produces medium to large-sized buds that are long and tapered. These resin-drenched buds are super sticky, coated in a thick layer of milky white trichomes and make for a viable source for hash and oil production. Flowering quite fast for a landrace Sativa with an indoor flowering period of only seven to nine weeks and is ready for harvest by October when grown outdoors in the Northern Hemisphere. Also, growers should be aware that Durban Poison and South African varieties in general, have a tendency to produce hermaphrodites.

Be the first to review “Durban Poison” Cancel reply