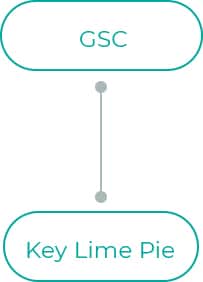 Key Lime Pie by Burning Bush Nurseries is a phenotype of Girl Scout Cookies. The genetics listed by the breeder that makes up this Girl Scout Cookies pheno are Durban Poison x OG Kush x Cherry Kush. With the actual true genetics of the original GSC being unknown it can be asserted that this is pure speculation on the part of Burning Bush Nurseries. Indeed, the limited amount of public information on the conception of Key Lime Pie makes it hard to deduce if it is an actual bred from scratch line or the result of someone finding a seed in a bud of GSC and making a strain out of it.

As her name implies, she has serious citrus terps with sweet lime and chocolate mint being predominant. Once blazed, Key Lime Pie emits a blend of candy and minty-like flavors highlighted with subtle notes of citrus and earth.

Key Lime Pie is known for her fast-acting, powerful and intense high. She can be a productive and functional high if enjoyed lightly but this strains high THC content makes her one to really respect! She has the ability to really zonk and sedate!

Medically, this strain has been known to help patients manage PTSD, reducing the severity of associated symptoms such as anxiety, depression, insomnia and sudden bursts of rage.

This strain is considered a moderately difficult strain to grow. She produces medium-height plants that have medium-sized greeny purple buds that are super sticky and heavily frosted. She responds well to topping and growing her in soil with organic nutrients will enhance her terpene profile. She has a nine to ten week flowering period and is ready for harvest by mid-October when grown outdoor in the Northern Hemisphere.

For those interested in obtaining Key Lime Pie genetics, feminized seeds have been released in the past but at the time of writing, we could not locate any seedbanks with stock. However, it should be noted that Key Lime Pie is a strain that has been used in numerous crosses by reputable breeders and there must be clones out there….somewhere!

Be the first to review “Key Lime Pie” Cancel reply