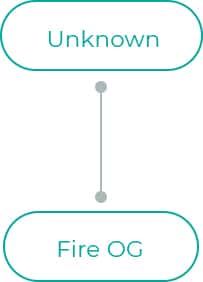 Fire OG is an Indica dominant hybrid that is thought to have originated from the San Fernando Valley region sometime during the 1990s. Originally passed along in clone form this strain gained a reputation as one of the strongest OG Kush hybrids on the market. The breeder OG Raskal is largely responsible for introducing Fire OG genetics to the wider community. Having used the clone in many of his breeding projects, notably White Fire OG and passing the cut to swerve of Cali Connection who in turn made Raskal OG with it. Fire OG gained her name from the fiery red appearance of her flowers and her extremely high THC content.

This strain is perhaps not the best choice for those with low tolerance to cannabis. Her effects are hard-hitting and long-lasting. Her onset is cerebrally uplifting and euphoric then gently subsides into a more lazy, sleepy and sedative high. This potent herb can be both mentally and physically relaxing and can at times result in a drowsy come-down with common couch locking traits.

Medically, this powerful relaxant can be of benefit for those struggling or incapable of falling and staying asleep. She also boasts qualities that can aid those suffering from anxiety or depression.

This strain is considered a difficult strain to cultivate and probably not the wisest choice for the novice grower. Fire OG grows medium-height and produces dense buds with long curly reddish/orange hairs that have a dank frosted resinous appearance. She has an indoor flowering period of ten to eleven weeks and is ready for harvest by late October when grown outdoors in the Northern Hemisphere. Strategic defoliation is recommended in order to increase light exposure to the plant’s lower bud sites.

For those seeking to acquire Fire OG genetics, it should be noted that this is a clone-only strain that is apparently still in existence, although it is not widely circulated. In seed form, of note is Cali Connections Fire OG. This cross consists of the Raskal OG mentioned above crossed to San Fernando Valley OG Kush. As always and especially with desirable and popular strains we recommend checking provenance and reputations before making a purchase.

Be the first to review “Fire OG” Cancel reply