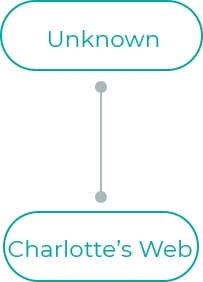 Charlotte’s Web is a Sativa leaning hybrid that was derived from industrial hemp. This award-winning medical strain was specifically bred for and named after Charlotte Figi, a five-year-old girl who at the time was suffering seizures due to having Dravet Syndrome. After being administered Charlotte’s Web, it was found she experienced a dramatic decrease in seizures. Charlotte’s Web was created in 2012 by Colorado-based breeders, The Stanley Brothers of Realm of Caring. This strain was selected based on high CBD content and was originally named “Hippie’s Disappointment” due to its less than 1% THC content. The Stanley Brothers gained international media recognition in 2013 when Charlotte’s Web first featured in a CNN documentary called “Weed”.

Regarding smell and taste, Charlotte’s Web buds emit a pleasant earthy and piney aroma. This strain tastes sweet with the addition of piney undertones and hints of citrus and sage.

This herb induces little to no psychoactivity, though some may experience mild relaxation and increased energy levels.

As mentioned earlier, this strain was developed for medical use, specifically to reduce the frequency and severity of seizures in patients with epilepsy and other related conditions. Her high CBD content has also been beneficial for treating a wide range of disorders including Parkinson’s and other neuropathic diseases.

Information online regarding the cultivation of this strain is limited due to the fact that seeds have never been commercially available to the public. What is known is that she is considered a relatively easy strain to grow and is suitable for both indoor and outdoor cultivation. Charlotte’s Web plants grow short and stout in an Indica fashion while producing long tapered Sativa typical structured buds with a sage green complexion and smallish orange pistils. She has an indoor flowering period of eight to nine weeks and is ready for harvest by October when grown outdoors in the Northern Hemisphere.

For those interested in obtaining Charlotte’s Web genetics, as mentioned earlier seeds and clones were never made commercially available to the public and it is only sold in consumable product form directly from The Stanley Brothers website, www.charlottesweb.com.

Be the first to review “Charlotte’s Web” Cancel reply