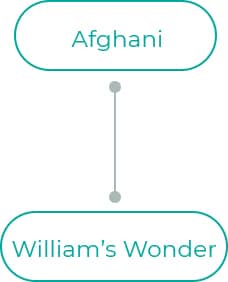 William’s Wonder is one of those old-timer strains that is held in high regard and remembered fondly. Sometimes referred to as Willy’s Wonder, she is a pure Indica that first appeared in issues of the Super Sativa Seed Club catalogs of 1987 and 1988. According to Karel the founder of SSSC, he obtained this strain in seed form from a friend who had recently traveled to the USA in search of new genetics. The seeds were sourced in New York and brought back to Holland.

This tasty herb delivers a sweet tropical aroma of fruit with earthy undertones and is known to emit a tangy citrus scent when her buds are broken up. The taste is sweet and sour with a mix of fruity floral flavors and spicy herbal notes on exhale.

Overall, William’s Wonder’s high is a euphoric and super relaxing experience. Her potent body buzz is accompanied by a powerful head high that at times may become foggy and spacy.

Medically, she has been known to be beneficial in helping treat pain and inflammation as well as having the ability to aid those suffering from migraines by alleviating intensity.

William’s Wonder is a moderately difficult strain to grow and is better suited to indoor cultivation. She grows in typical Indica fashion with a structure that shows tight internode spacing. Growers can expect dense resinous buds with a beautiful electric green complexion. Indoors, her flowering cycle will run for around eight to nine weeks.

For those wishing to acquire William’s Wonder genetics, it should be noted that this is a rare clone-only strain. However, there have been various breeders that have worked this clone-only strain into seed versions with varying degrees of success. Breeders of note that have released seeds in the past with William’s Wonder Genetics and may do so again are; Stray Fox Gardens, @jtoucans (Instagram) and Reeferman Genetics.

As with a lot of strains that are rare and in-demand there are fake genetics on the market being passed off as the real thing! Be wise, check the provenance and reputation of the seller before making any purchases.

Be the first to review “William’s Wonder” Cancel reply