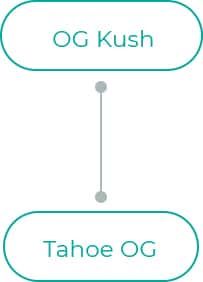 Tahoe OG is a hybrid cross that originated from the Lake Tahoe area. It was created by California-based breeder, Ganja Guru. This multiple award-winning strain is an OG Kush phenotype that is renowned for its trichome and THC production. There are stories of this strain being around in the Eighties, but this is contrary to her heritage, with cannabis folklore telling us that OG Kush emerged in the early 90s. Tahoe OG is also not to be confused with Tahoe OG Kush which is a far more widely circulated but watered down version made by The Cali Connection.

Tahoe OG buds are a pungent blend of lemony citrus and pine with a sharp fuel-like tang. Her smoke is thick and heavy with strong citrus flavors and earthy notes.

Tahoe OG’s high starts with a euphoric cerebral wave that gently elevates the mind and is balanced with a heavy-hitting body buzz that eases away tensions.

Medically, she has been known to be beneficial in helping alleviate stress and anxiety. Additionally, she can be a good choice for those suffering from chronic pain, including migraines and inflammatory issues from arthritis.

This strain is considered a moderately difficult strain to cultivate and perhaps not the wisest choice for the novice grower. She can grow fairly tall, has a good stretch during flowering and is lankier when compared to some other OG phenotypes. Her buds are dense, bulky and are an eye-catching shade of neon green, patched with reddish pistils and sparkling trichomes. Tahoe OG has an indoor flowering period of nine to ten weeks and is ready for harvest by mid-October when grown outdoors in the Northern Hemisphere.

For those interested in acquiring Tahoe OG genetics it should be noted that this is a clone-only strain. However, there have been several strains released by various breeders that purport to be Tahoe OG in seed form. As always to the consumer, we advise due diligence regarding provenance when purchasing genetics.

Be the first to review “Tahoe OG” Cancel reply