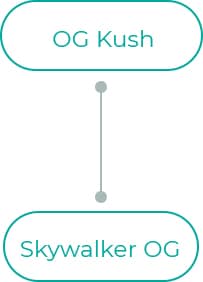 Skywalker OG is a hybrid that exhibits quite a rare trait for an OG in that her traits lean more towards Sativa. Originating from California where she was first known to have existed in clone form circa 2003. Skywalker OG is thought to be an S1 of the original OG Kush92. She got her name from the guy who first grew her whose name was Luke. There are a few seed lines by various breeders that are also traded under the name Skywalker OG but they differ from the clone-only version in that they are all Indica leaners! The most common genetic makeup used is the multiple award-winning cross of Dutch Passion’s Skywalker (Mazar x Blueberry) and an unknown OG Kush.

Known for her complex terpene profile, Skywalker OG is both spicy and herbal with diesel-like notes. She also tastes spicy, herbal and is accompanied by gassy flavors and an earthy aftertaste that lingers.

Considered a potent strain, this heavy-hitting Kush hybrid has a reputation for an intense euphoric cerebral high! Skywalker OG is a great strain to enjoy with food, increasing appetite and bringing incredible sensations to the taste buds! Effects are long-lasting and it’s not uncommon to experience a drowsy and sleepy comedown after blazing this powerful herb.

Medically, Skywalker OG has been known to be of benefit to those suffering from eating disorders. Her heavy narcotic effects can also help alleviate pain and stress.

Skywalker OG is considered a relatively easy strain to cultivate. She is a bushy, medium-sized plant that has a thick Indica type structure with tightly packed internode spacing and thick fan leaves. Her buds are medium-sized, sticky and resinous with a roundish structure, olive green complexion and purple hues. She has an indoor flowering period of eight to nine weeks. While outdoors she is ready for harvest by October when grown in the Northern Hemisphere.

For those interested in acquiring Skywalker OG genetics she is available from several different breeders, none of whom we endorse at this time. The original cut of the clone-only version is thought to be still in existence and although by name she is widely available on the legal rec market. We have yet to find a vendor with the original clone and most seem to relate to the seedline genetics. As always we recommend checking the reputation of the vendor and provenance of genetics whenever possible before completing any purchase.

Be the first to review “Skywalker OG” Cancel reply