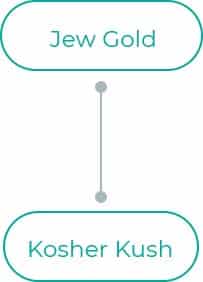 Kosher Kush is an Indica dominant hybrid that first gained recognition in the cannabis scene as a clone-only OG Kush cut known as “Jew Gold”. This potent cut was circulating around LA during the early 2000s where it came into the possession of DNA Genetics. She was later rebranded “Kosher Kush” and released in seed form to the public by DNA Genetics.

Kosher Kush’s aroma is mainly citrus and earth with piney and diesel undertones. Once blazed, her initial flavor is earthy before unleashing sweet notes of citrus and pine.

This heavy-hitting Indica hits fast, leaving most smokers in a drowsy and spacy headspace that’s better suited for an evening or night-time session. Psychically, this potent bud has long-lasting relaxing and sedating effects, while being both cerebrally calm and mildly euphoric.

Medically, Kosher Kush is commonly recommended for the treatment of sleeping disorders. It has also been reported that this strain can also induce negative side-effects such as headaches or even vertigo for some.

Kosher Kush is considered a low-maintenance strain that can be grown both indoors and out with relative ease. She grows tall, has a tendency to stretch and responds well to heavy feeding. This popular variety displays a strong natural resistance to most common molds, pests and powdery mildew. Plants have a great calyx to leaf ratio, making for an easy trim. She has an indoor flowering period of nine to ten weeks and is ready for harvest by mid-October when grown outdoors in the Northern Hemisphere. For best results and potentially increased yields, breeders at DNA genetics recommend topping plants.

For those interested in obtaining Kosher Kush genetics, both regular and feminized seeds can be easily purchased directly from DNA Genetics website or through reputable online vendors.

Be the first to review “Kosher Kush” Cancel reply