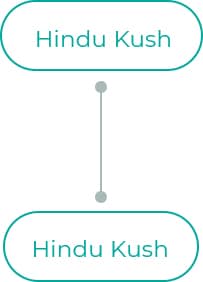 Hindu Kush is a 100% pure Indica landrace strain that is named after its place of origin in the Hindu Kush mountains that span over 500 miles and forms the border between Pakistan and Afghanistan. This multiple award-winning landrace is recognized for comprising of the purest Indica genetics on the planet. She gained mass popularity when she was brought over to the United States back in the 1960s. Also, it should be noted that the Hindu Kush variety offered by Sensi Seeds is rumored to actually be Northern Lights #2, which the seed company came into the procession of after acquiring “The Seed Bank of Holland” from Nevil Schoenmakers. Another popular version of Hindu Kush by Sacred Seeds was released in 1983.

Regarding effects, this pure Indica offers a combination of heavy body sedation and euphoric bliss. Her long-lasting effects induce an overall calming and meditative high without compromising mental clarity. Couch-lock with a major case of the munchies is also common with this super relaxing herb.

Medically, this herb is commonly used to treat insomnia, helping facilitate sleep while also reducing the number of interruptions throughout the night.

Hindu Kush is considered an easy strain to cultivate, being highly resistant to mold, powdery mildew, pests and plant disease. This robust strain grows short and compact in a Christmas tree-like structure with wide lateral branching that’s ideal for Scrogging. She produces dense, spade-shaped buds that are forest green with rust-colored hairs and heavy trichome production, giving a frosted appearance. Her sticky resinous buds are suitable for extracting oil or making hashish. Hindu Kush has an indoor flowering period of only seven to eight weeks and is ready for harvest by late September when grown outdoors in the Northern Hemisphere. For best results and potentially increased yields, growers are recommended to regularly prune plants in order to increase air circulation and light exposure.

Be the first to review “Hindu Kush” Cancel reply