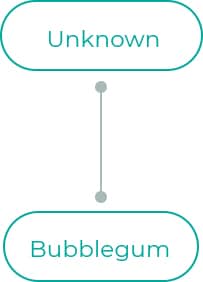 The Story of the Indica leaning hybrid Bubblegum starts with a character called Victor who ran a bar called “The Church House” in Providence R.I and was a friend of Adam Dunn. Victor was a regular recipient of a strain called Chewing Gum that supposedly came from Illinois. Over a period of time, Victor collected the seeds he found from the Chewing Gum strain and when he went to Amsterdam to visit Adam Dunn he brought them with him. When in Amsterdam the seeds were germinated and out of over one hundred plants, one was selected that was given the moniker Bubblegum. At first, this elite plant was not passed out and shared, but a break in occurred at Dunn’s grow space in which the whole place was ransacked and gutted, fortunately leaving them a single plant with one node on it to reveg and keep alive.

Dunn decided to share the cut with Simon from Serious Seeds and Tony of Sagarmatha, presumably as an insurance policy in case something similar happened to jeopardize Bubblegum’s existence. At this time none of their companies were in existence and the three of them worked together at Sensi Seeds. Bubblegum is the strain that launched both TH Seeds and Serious Seeds, respectively being their first seed offering to the general public. Victor went on to start the very successful Grey Area Coffee Shop and has the dubious honor of being deported twice from Holland. Serious Seeds racked up thirteen awards with their version of Bubblegum. Adam Dunn has gone on to become one of the most well-known names in the cannabis community.

As her name suggests, Bubblegum’s terpene profile is super sweet and fruity, reminiscent of Bazooka Joe Bubblegum! Once blazed, her smoke is thick, billowing a cloudy blend of sweet floral essence with hints of berry.

Bubblegum offers an overall sedating and deeply relaxed experience. This long-lasting herb is known to be cerebrally calming and euphoric, making for a relaxed and chilled-out smoke.

Medically, she can help ease negative effects associated with anxiety and stress. Her euphoric qualities can also be beneficial for those fighting depression.

Bubblegum is considered a moderately difficult plant to grow and perhaps not the best choice for the novice grower. This strong hardy strain shows good resistance to mold and bugs. She produces medium-height plants that have minimal side branching, heavy compact buds with a high calyx to leaf ratio. Bubblegum has an indoor flowering period of eight to nine weeks and is ready for harvest by mid-October when grown outdoors in the Northern Hemisphere.

For those interested in obtaining Bubblegum genetics it should be noted that this is a clone-only strain that is not available to the general public. However, Serious Seeds offer an IBL version in both regular and feminized forms, while she is also available in feminized and auto-flowering seed forms directly through TH Seeds’ website. The Sagarmatha version is no longer listed for purchase on their website. As always we recommend checking the reputation of the vendor and provenance where possible before parting with your hard-earned cash!

Be the first to review “Bubblegum” Cancel reply